Born in Dublin, Brendan showed a flair for the visual arts from a very early age. No blank surface was safe from Brendan’s endeavours, and when the family stripped wallpaper for redecorating they would inevitably find some of Brendan’s doodlings on the plaster beneath, revealed like some long lost fresco. 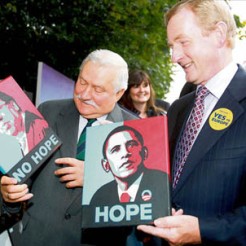 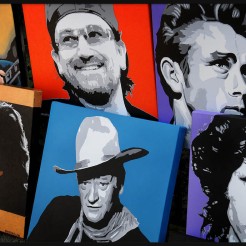 Paintings on display alongside railings. 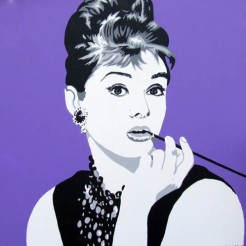 Inspired by his Evening Herald comic strip favourites like “Little Sport” and “Mutt and Jeff”, he developed a talent as a cartoonist. Ever the entrepreneur, Brendan developed a lucrative sideline while at school in doing caricatures for classmates. He also submitted cartoon ideas to magazines like Melody Maker and New Musical Express and was delighted when some were published.

His real passion has always been for painting and drawing and in recent years he has concentrated on these areas. Although largely self-taught he began to attend classes in recent years to improve his technique.

Every Sunday Brendan displays his work at The Merrion Square railings. As a member of the Artworks Gallery Group in Malahide, Brendan regularly shows his work at the group’s monthly exhibition along the railings of the Malahide Tennis Club in summertime and also at the Pavilions Shopping Centre in Swords. He has also exhibited at the Peoples Art Exhibition, St Stephen’s Green railings.

A selection of Brendan’s work can be viewed on the site and is available for sale. He would also be happy to discuss special commissions. Simply contact Brendan by clicking on the contact Icon and he will revert to you ASAP. Brendan has sold paintings to the famous Irish Golfer Paul Mc Ginley. He has also sold some paintings to the Irish Embassy staff in Washington DC.